You are here: Home / Laser Toner Cartridge Savings / How a laser printer works

How A Laser Printer works

There are typically seven steps involved in the laser printing process:

Each horizontal strip of dots across the page is known as a raster line or scan line. Creating the image to be printed is done by a Raster Image Processor (RIP), typically built into the laser printer. The source material may be encoded in any number of special page description languages such as Adobe PostScript (PS, BR-Script), HP Printer Command Language (PCL), or Microsoft XML Page Specification (XPS), as well as unformatted text-only data. The RIP uses the page description language to generate a bitmap of the final page in the raster memory.
For fully graphical output using a page description language, a minimum of 1 megabyte of memory is needed to store an entire monochrome letter/A4 sized page of dots at 300 dpi. At 300 dpi, there are 90,000 dots per square inch (300 dots per linear inch). A typical 8.5 × 11 sheet of paper has 0.25-inch (6.4 mm) margins, reducing the printable area to 8.0 × 10.5 inches (270 mm), or 84 square inches. 84 sq/in × 90,000 dots per sq/in = 7,560,000 dots. Meanwhile 1 megabyte = 1,048,576 bytes, or 8,388,608 bits, which is just large enough to hold the entire page at 300 dpi, leaving about 100 kilobytes to spare for use by the raster image processor.
In a color printer, each of the four CYMK toner layers is stored as a separate bitmap, and all four layers are typically preprocessed before printing begins, so a minimum of 4 megabytes is needed for a full-color letter-size page at 300 dpi.
Memory requirements increase with the square of the dpi, so 600 dpi requires a minimum of 4 megabytes for monochrome, and 16 megabytes for color at 600 dpi. Printers capable of tabloid and larger size may include memory expansion slots.

Applying a negative charge to the photosensitive drum
In older printers, a corona wire positioned parallel to the drum, or in more recent printers, a primary charge roller, projects an electrostatic charge onto the photoreceptor (otherwise named the photo conductor unit), a revolving photosensitive drum or belt, which is capable of holding an electrostatic charge on its surface while it is in the dark.
An AC bias is applied to the primary charge roller to remove any residual charges left by previous images. The roller will also apply a DC bias on the drum surface to ensure a uniform negative potential.
Numerous patents describe the photosensitive drum coating as a silicon sandwich with a photocharging layer, a charge leakage barrier layer, as well as a surface layer. One version uses amorphous silicon containing hydrogen as the light receiving layer, Boron nitride as a charge leakage barrier layer, as well as a surface layer of doped silicon, notably silicon with oxygen or nitrogen which at sufficient concentration resembles machining silicon nitride

Laser neutralizing the negative charge on the photoreceptive drum to form an electrostatic image.
The laser is aimed at a rotating polygonal mirror, which directs the laser beam through a system of lenses and mirrors onto the photoreceptor. The cylinder continues to rotate during the sweep and the angle of sweep compensates for this motion. The stream of rasterized data held in memory turns the laser on and off to form the dots on the cylinder. Lasers are used because they generate a narrow beam over great distances. The laser beam neutralizes (or reverses) the charge on the black parts of the image, leaving a static electric negative image on the photoreceptor surface to lift the toner particles.
Some non-laser printers expose by an array of light emitting diodes spanning the width of the page, rather than by a laser (“exposing” is also known as “writing” in some documentation).

The surface with the latent image is exposed to toner, fine particles of dry plastic powder mixed with carbon black or coloring agents. The toner particles are given a negative charge, and are electrostatically attracted to the photoreceptor’s latent image, the areas touched by the laser. Because like charges repel, the negatively charged toner will not touch the drum where the negative charge remains.

The photoreceptor is pressed or rolled over paper, transferring the image. Higher-end machines use a positively charged transfer roller on the back side of the paper to pull the toner from the photoreceptor to the paper.
Fusing
Melting toner onto paper using heat and pressure.
The paper passes through rollers in the fuser assembly where heat (up to 200 Celsius) and pressure bond the plastic powder to the paper.
One roller is usually a hollow tube (heat roller) and the other is a rubber backing roller (pressure roller). A radiant heat lamp is suspended in the center of the hollow tube, and its infrared energy uniformly heats the roller from the inside. For proper bonding of the toner, the fuser roller must be uniformly hot.
Some printers use a very thin flexible metal fuser roller, so there is less mass to be heated and the fuser can more quickly reach operating temperature. If paper moves through the fuser more slowly, there is more roller contact time for the toner to melt, and the fuser can operate at a lower temperature. Smaller, inexpensive laser printers typically print slowly, due to this energy-saving design, compared to large high speed printers where paper moves more rapidly through a high-temperature fuser with a very short contact time

Toner may occasionally be left on the photoreceptor when unexpected events such as a paper jam occur. The toner is on the photoconductor ready to apply, but the operation failed before it could be applied. The toner must be wiped off and the process restarted.

Multiple steps occurring at once

Once the raster image generation is complete all steps of the printing process can occur one after the other in rapid succession. This permits the use of a very small and compact unit, where the photoreceptor is charged, rotates a few degrees and is scanned, rotates a few more degrees and is developed, and so forth. The entire process can be completed before the drum completes one revolution.

Different printers implement these steps in distinct ways. Some “laser” printers actually use a linear array of light-emitting diodes to “write” the light on the drum. The toner is based on either wax or plastic, so that when the paper passes through the fuser assembly, the particles of toner melt. The paper may or may not be oppositely charged. The fuser can be an infrared oven, a heated pressure roller, or (on some very fast, expensive printers) a xenon flash lamp. The Warm Up process that a laser printer goes through when power is initially applied to the printer consists mainly of heating the fuser element.

This article is from Wikipedia: http://en.wikipedia.org/wiki/Laser_printer

The required fields are marked with an asterix *. Most blanks are optional - just fill in what you can and we'll contact you if more information is needed. 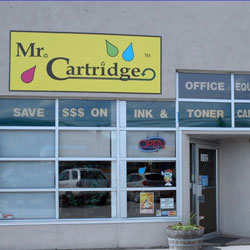 Located in The Cannery